The Commission submitted the following announcement to the International Examiner to share the achievements of Commissioners, staff, and community partners for their work in health equity.

The CORA is awarded to community organizations that have a positive impact on the health and quality of life of Asian American, Native Hawaiian, and Pacific Islander populations in the United States and its jurisdictions. CAPAA was nominated by Gail Brandt, Health Equity Manager with the Washington State Department of Health (DOH), for its work in health equity.

“We have been working closely with the Commission to improve health equity for Asian Pacific Americans,” Brandt said. “I was honored to accept the Asian & Pacific Islander Caucus of the American Public Health Association 2015 Community Organization Recognition Award in Chicago on behalf of CAPAA.”

The third place CORA was awarded to the Commission for its efforts to address health equity concerns among Asian Pacific Americans (APAs) in Washington State.

“We are appreciative of the state agency and community partners working with the Commission to improve the health and well-being of Asian Pacific Americans in Washington state,” said Michael Itti, CAPAA executive director. “We are committed to continuing our efforts to raise awareness of and advocate for policies to address the unique needs of our diverse Asian Pacific American communities.”

In the last year, CAPAA advocated for state agencies to collect and report out disaggregated data. The Commission successfully championed changes to the upcoming 2016 Healthy Youth Survey (HYS), which will collect data on seven Asian sub-population groups. The HYS provides important information about the health of youth in Washington.

CAPAA has been monitoring the state’s implementation of laws regarding recreational marijuana and has been working with the API Coalition Advocating Together for Healthy Communities (APICAT) to advocate for equitable access to translated materials, funding for community partnerships, and outreach and media efforts.

The Commission also recognizes the need to raise awareness of mental health in APA communities and led the coordination of a proclamation signed by Governor Inslee declaring July 2015 Minority Mental Health Awareness Month in Washington State. 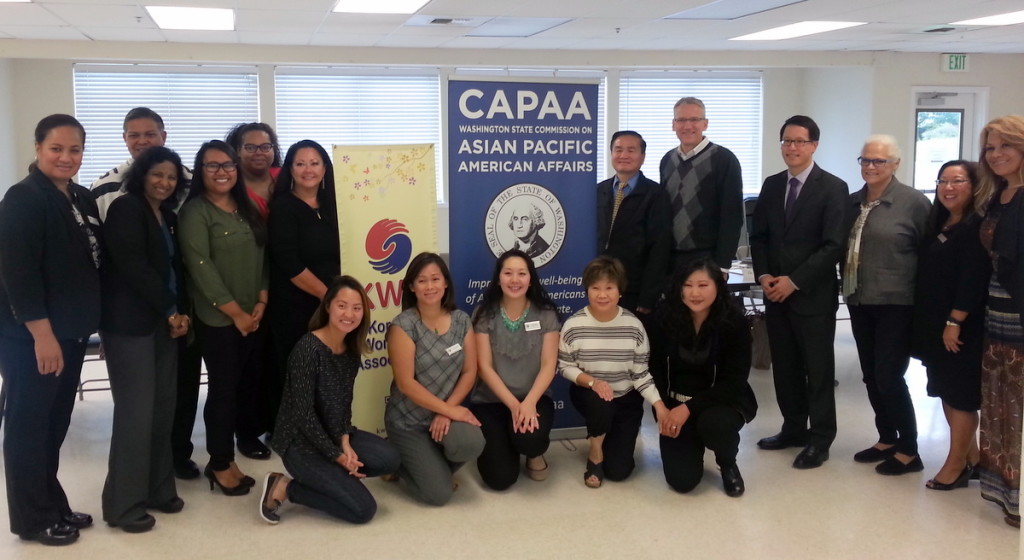 Secretary of Health John Wiesman honored the Commission for its work in health equity by attending CAPAA’s September board meeting at the Korean Women’s Association in Tacoma and announced the award to Commissioners and the public.