Since 1986, the Republic of the Marshall Islands, the Republic of Palau and the Federated States of Micronesia (Chuuk, Kosrae, Yap, Pohnpei) entered a Compact of Free Association with the United States. This Compact allows COFA citizens to freely enter, lawfully reside, and work in the U.S. in exchange for providing the U.S. exclusive military control of the region. 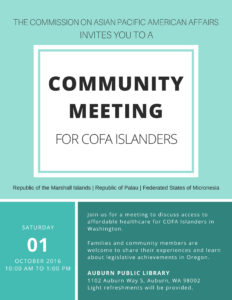 Currently, COFA migrants have limited access to healthcare benefits in the U.S., which perpetuates health inequities. Join CAPAA for a meeting with the COFA community in Auburn to hear about their experiences and discuss legislative efforts in Oregon and Washington.