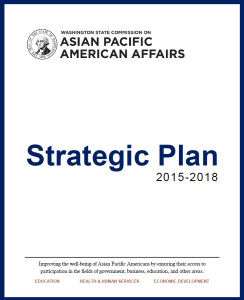 The Washington State Commission on Asian Pacific American Affairs begins its 41st year with an appreciation of the community leaders who have served and responded to a broad range of changing issues over four decades. The Commission remains committed to its purpose to improve the well-being of Asian Pacific Americans. We present our 2015-2018 strategic plan as our road map to address challenges and opportunities that continue to face our state’s most diverse population group in the areas of education, health and human services, and economic development.

All Washingtonians deserve a state government that is efficient, effective, and accountable. As Commissioners, our responsibility is to be a bridge between decision-makers and our communities to ensure that state government is responsive to one of the fastest growing populations in our state. From 2010 to 2012, the Asian American population grew by 8.1 percent, the fastest in the state, and Native Hawaiians and Pacific Islanders grew by 6.2 percent. Nationally, Washington has the seventh largest population of Asian Americans and the third largest population of Native Hawaiians and Pacific Islanders.

In the years ahead, our state’s leaders will make policy and budgetary decisions that will determine the course of our state well into the next decade. We value the powers and duties the Legislature has given the Commission to examine and define issues pertaining to the rights and needs of Asian Pacific Americans and make recommendations to the governor and state agencies with respect to desirable changes in programs and laws.

We encourage participation from the youth, families, and elders we represent to join in our efforts to improve the well-being of Asian Pacific Americans in Washington State.