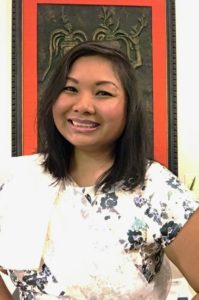 Governor Inslee recently announced the appointment of Sina Sam to serve on the Commission.

Commissioner Sina Sam is a 1.5 generation Cambodian American, born in a Thai refugee camp and raised in Seattle, WA. She has been active in the Cambodian community in Washington State for almost 20 years, and she is currently the Program Exam Specialist at Washington State University’s Global Campus. – Go Cougs!

Commissioner Sam is an experienced facilitator, lobbying for policies that benefit diverse communities of color, gender and reproductive justice, and immigrant and refugee rights. Sina’s advocacy work also centers on violence prevention, LGBTQ allyship, and furthering SE Asian visibility and political representation. Since 2013, she has partnered with the Southeast Asia Resource Action Center (SEARAC) as an Immigration Facilitator for their annual Leadership and Advocacy Training (LAT) program. In 2015, Sina was selected for SEARAC’s Leadership, Empowerment and Advocacy Fellowship (LEAF), and in 2017-2018 served as an Advisory Council Member for SEARAC’s “Moving Mountains” Equity Summit. Since being a participant of SEARAC’s LAT program in 2011, Sina has been an active partner in hopes of building a strong leadership pipeline for developing our next community advocates, especially from Washington State.

Her most pressing advocacy work centers on the high rates of incarceration and deportation for Cambodian Americans and other vulnerable API populations. As an organizer with Formerly Incarcerated Group Healing Together (F.I.G.H.T.), Sina volunteers her time as a sponsor to API groups in prison to offer community support, cultural engagement and address API recidivism rates. In 2016, Sina joined a national delegation led by 1Love Movement and the Southeast Asian Freedom Network (SEAFN) to help launch a deportee-led, anti-deportation support organization called 1Love Cambodia. The delegation’s efforts were documented by NBC Asian America in a documentary titled, “Deported.”

Arriving in Seattle with her family as refugees during the 1980s, Commissioner Sam recalls the unique challenges and hardship her family faced in adjusting to their new home. Throughout her childhood, Sina immersed herself in learning about her parent’s homeland and their lives back in Cambodia, trying to grapple with why it was so hard for them to talk about their past. After gaining further education through Seattle Central and North Seattle College, taking courses that discussed trauma, the high rates of Post-Traumatic Stress Disorder among survivors of genocide and institutional challenges of resettlement for refugees and marginalized communities, she came to better understand the structural needs of her community. And is fortunate to have avoided the well-documented, school to prison pipeline.

Growing up in the U.S. she is afforded opportunities that her parents can only dream of, but also keenly aware of the struggle and realities that has made her success possible. In high school Sina was selected as a “Natural Helper” amongst her peers, someone others turned to for help. She was a student athlete and founded a student organization called the YMCA Earth Service Corps, a peer education group that lead environmental service projects. At the age of 16, Sina became an unexpected teen parent and dropped out of high school, but earned her GED at 17 and was the student keynote speaker and valedictorian of her graduating class. In college, at the University of Washington and Washington State University, she helped create and/or served in leadership positions for many student organizations such as: the Khmer Student Association at UW, Rajana Society, Voices for Planned Parenthood, Green Dot – bystander intervention, VDAY – gender violence education, Team Transfer, and the Khmer Student Association at WSU. Sina also served on the President’s Commission on the Status of Women, was awarded the 2013 Student Woman of Distinction Award and recipient of honors and achievement awards in the Critical Culture, Gender and Race Studies department at WSU.