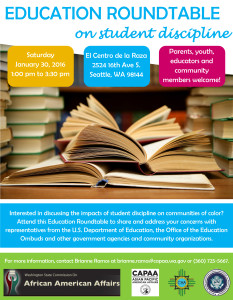 hosting an Education Roundtable with a focus on student discipline.

The Roundtable will take place on Saturday, January 30 from 1:00-3:30pm at El Centro de la Raza in Seattle. Parents, youth, educators and community members will have the opportunity to share and address their concerns regarding the impacts of student discipline on communities of color with representatives from the U.S. Department of Education, the Office of the Education Ombuds and other government agencies and community organizations.

WHAT: Education Roundtable on Student Discipline