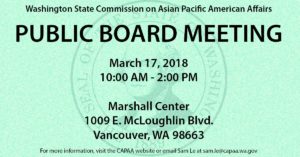 The Commission will be convening a public board meeting on March 17, 2018 at the Marshall Center in Vancouver from 10:00 AM – 2:00 PM. The Commission will review policy changes from the 2018 legislative session, hear updates from its committees, and connect with organizations about their work in the community. The meeting will also include time for public comment.

Visit the Commission’s website to learn more about the Public Board Meeting.

This week, both the House and Senate released their 2018 supplemental budget proposals. House and Senate committees held public hearings and executive sessions on bills from the opposite chamber, including legislation pertaining to wrongful injury or death of individuals, body worn cameras, job applications and conviction history, and automatic voter registration.

The Commission has been tracking legislation that may be of interest to Asian American and Pacific Islander communities in the areas of civil rights & justice, economic development, education, health & human services, and voting & voter rights. To see the status of legislation moving through the legislative process, view our Bill Tracking List.

Day of Remembrance at the Washington State Legislature

On February 19, the Legislature paused to recognize and reflect on the 76th anniversary of the signing of Executive Order 9066 and to honor the history and lessons learned of the incarceration of more than 120,000 persons of Japanese ancestry from the West Coast during World War II. Listen to the floor remarks by Representatives Santos, Johnson, Stonier, Graves, and Stambaugh in support of House Resolution 4673.

On February 20th and 22nd, the House and Senate introduced and adopted resolutions honoring the service and sacrifice of Filipino and American veterans of World War II. The United States Congress, in 2016, passed the Filipino Veterans of World War II Congressional Gold Medal Act of 2015 and honored veterans at a national celebration in Washington, DC in October 2017. The local chapter of the Filipino Veterans Recognition and Education Project Region 8 is planning events to recognize veterans and their families.

The Department of Social and Health Services (DSHS) is seeking Summer Interns who will help the Office of Diversity & Inclusion to increase participation of community members in the DSHS Employment Pathway Program. Summer Interns will be collecting and analyzing data, researching and developing recommendations for DSHS in supporting students and employees, and creating digital communications to engage students and recent graduates.

To apply, applicants must be students and enrolled in undergraduate studies in the fall of 2019. View here for more information on applying.