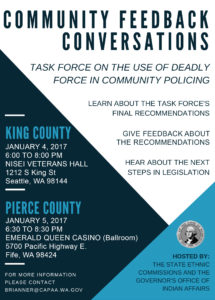 The Commission on Asian Pacific American Affairs invites community members to a community conversation and report back about the Joint Legislative Task Force on the Use of Deadly Force in Community Policing. The Task Force examined Washington’s laws and practices regarding the use of deadly force by police officers.

The Report Back meeting will inform community members about the work of the task force and its final recommendations.

Community Feedback Conversations:
Task Force on the Use of Deadly Force in Community Policing
(community meetings co-hosted by CAPAA, CHA, CAAA, and GOIA)

*Additional speakers and agenda items to be announced

Advocates for police accountability proposed legislation, House Bill 2907, to change state law on the legally permissible uses of deadly force by police officers. Currently, a public officer or peace officer cannot be held criminally liable for using deadly force when it is used without malice and with a good faith belief that the use is permitted under the law.

Although the bill did not pass, the Legislature approved House Bill 2908 in 2016, which established the Joint Legislative Task Force on the Use of Deadly Force in Community Policing. The task force submitted a report to the Governor and the appropriate committees of the Legislature by December 1, 2016.

About the Author: Commission